After he had finished speaking, Jesus said to Simon: “Put out into the deep and let down your nets for a catch…Don’t be afraid; from now on you’ll be catching people.”       Luke 5, 1-11

The fishing metaphor on which today’s gospel-reading is built is an appropriate one for the message Jesus set out to convey. At least four of Jesus’ first disciples came from families who earned their living from fishing. We have all come to appreciate that commercial fishing is hard work that calls for enduring commitment, daily grind, risk, night-time labouring and team-work. Even when the fishing is not going on, nets have to be mended, boats maintained and fish transported to market. Pastoral ministry also involves commitment, endurance, risk, unpredictability and schedules outside the 9.00 am to 5.00 p.m. working day. Today’s account has the unusual addition of one whose background was in carpentry and joinery giving directions to seasoned fishermen who knew that trying to net fish in the middle of the day was really a waste of time.

We are not told what went through Peter’s mind when Jesus asked him to launch into the deep and lower the nets. But he may well have been saying to himself that Jesus would soon learn that such activity would come to nothing. Under his breath, Peter was probably saying something like: “Well, if that’s what you want, Jesus, we’ll do it, but don’t expect too much.” What eventuated was the first step in a lesson that Peter came to learn very quickly: Once you let Jesus into your life, then anything can happen. Give Jesus an inch and he will more than likely take a mile! On a lower scale and without knowing it, Peter’s obedient response to Jesus paralleled Mary’s reply to Gabriel: “Be it done to me according to your word.”

The following Dilbert comic strip, which points to some of the anomalies that take place in the world of business and commerce, provides us with another entry point into appreciating the significance of today’s gospel-reading: 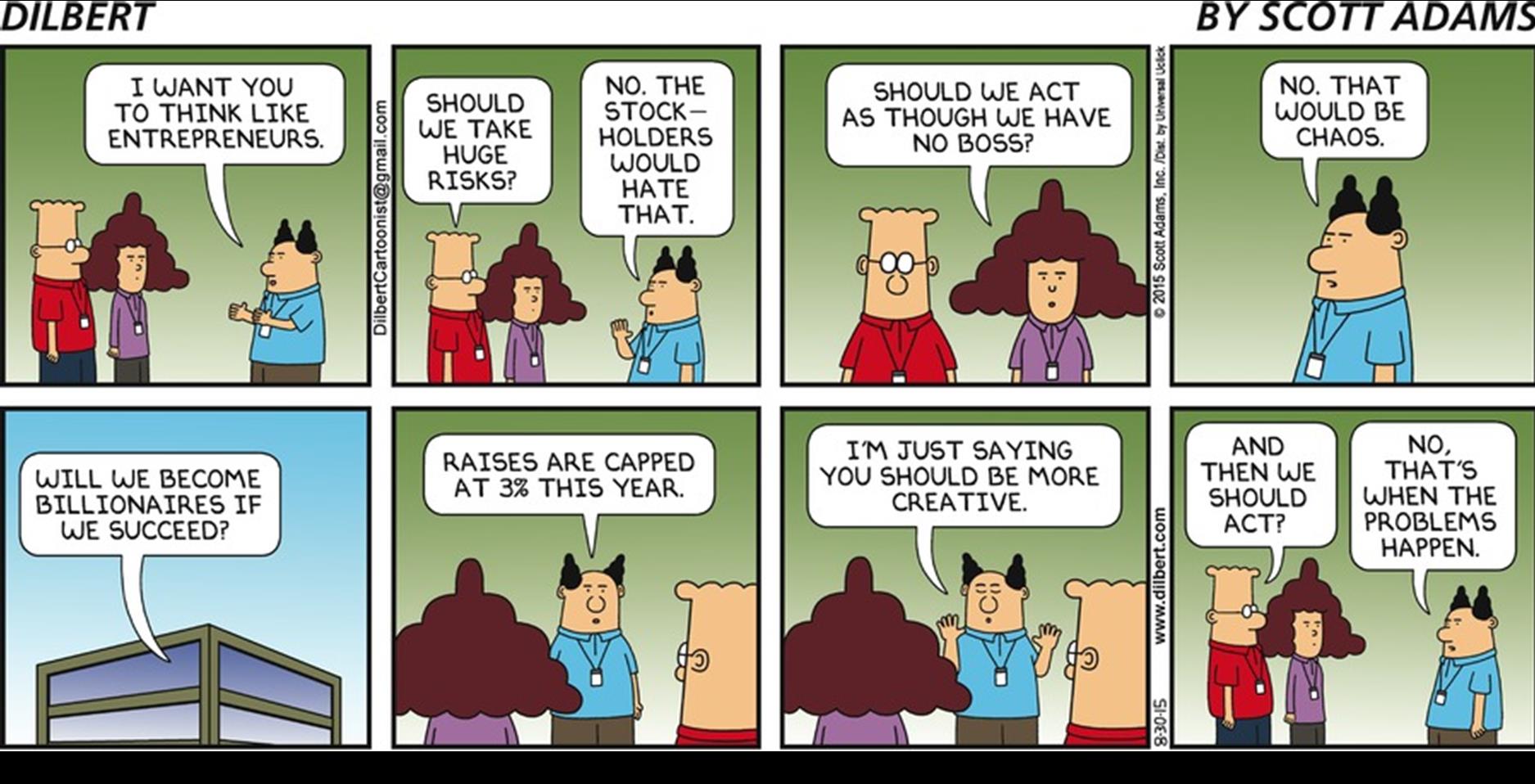 From time to time, we all have dreams of trying something different in the work we do or in our personal lives. We dream of taking risks, of launching out into the deep or the unknown and untried. Daring to live the Gospel involves similar risks and experimentation. But then we think of possible problems and end up doing little or nothing. We heed the cautions of others on the sidelines or are afraid of the ridicule and criticism that might be directed at us if we fail. This reminds me of the remark of a wise friend who once said to me: “You know, the fear of failure and death can be more comfortable than the threat or risk of resurrection!”

What bowled Peter over was that Jesus’ departure from good sense and proven practice turned out to be far more successful than the methods he had always used. He suddenly realised that Jesus was inviting him to get involved with him in activities with which he might not be able to cope. So, he asked Jesus to let him be, and played the inferiority card we have all used: “Look, Jesus, I’m just not good enough to get mixed up with you. I won’t be able to cope.” But Jesus would have none of it. Moreover, his immediate response to Peter is not exactly full of reassurance: “Don’t be afraid; from now on you’ll be catching people” (Luke 5, 10). Catching fish in abundance is hard enough, but, when I look at my world, I see a panoply of cynics, doubters, disbelievers, perpetrators of domestic violence, fraudsters and some decent, honest, admirable people, and begin to wonder how many of my efforts might attract the attention of even a few. But then I remember that I have failed to acknowledge that I have the assurance that God’s Spirit is with me to bolster my efforts and risks.

Of note in the exchange between Peter and Jesus is the fact that Jesus does not contradict Peter’s protestations of his sinfulness and lack of faith. Therein lies a message for all of us. Despite our personal inadequacies and repeated failures to measure up to how we would like to be, Jesus keeps on assuring us that he wants to use our feeble efforts to bring life, love and encouragement to those around us. We may never experience the satisfaction of seeing our metaphorical nets filled to breaking-point, but it will be a source of great consolation when our hearts are broken open with compassion for the imprisoned, the oppressed and the needy.