Marea Donovan has been a member of Catalyst for Renewal for over 25 years. Marea was instrumental in the establishment of the Spirituality in the Pub movement, coordinating the SIP committee at Paddington in Sydney and chairing the National SIP Committee, in which role she has mentored and encouraged SIP coordinators across NSW, Victoria and beyond. Always innovative and energetic, in 2020, in the face of the Covid-19 pandemic, Marea led the transition of the SIP format into its online form as Spirituality on the Sofa, thereby establishing a new forum for conversation that Catalyst will continue to provide in 2022. Marea has served two 6 year terms as President of Catalyst for Renewal.

In addition to her deep and continuing commitment to Catalyst, Marea has enjoyed a distinguished career as wife, mother, lawyer and governance leader in Catholic education, including as Deputy Chair of the NSW Catholic Education Commission. She remains an active parishioner at St Francis’ Church in Paddington.

In consequence of this rich life of service and commitment, Marea has been recognised by Pope Francis through admission as a Dame to the Pontifical Equestrian Order of St. Gregory the Great.

This papal honour was bestowed upon Marea by the Archbishop of Sydney, Anthony Fisher OP, representing Pope Francis at a ceremony in the Cathedral House of St Mary’s Cathedral, Sydney on Friday 3 December 2021. Making the assumption that most readers will be unfamiliar with the format of this ceremony, we describe it briefly.

The ceremony took place in a small reception room. In the presence of the Archbishop, the three award recipients (all women on this occasion) were seated facing other attendees who were the nominators, family and friends of the recipients. Proceedings were led by Mr Chris Meney, Chancellor of the Archdiocese.

Mr Meney opened proceedings with the acknowledgement of country and a welcome to all in attendance. Archbishop Fisher then read a prayer for Pope Francis. Mr Meney provided a brief description of the awards, pointing out that they are made in recognition of distinguished service to the church, not as the culmination of this service but to encourage the recipients to continue in their works and to inspire others in service.

Archbishop Fisher then presented the awards to the recipients, including affixing the cross of the relevant order:
• Margaret Fitzgerald RSC was awarded the Pro Ecclesia et Pontifice Cross after faithfully serving the Church for six decades as a Sister of Charity in the fields of education and social outreach. Sister Margaret worked for 35 years in leadership roles in Catholic education, as a Pastoral Carer at St Vincent’s Private Hospital in Sydney and for Sisters of Charity Outreach;
• Ms Patricia Thomas was awarded Dame of the Order of St Sylvester for her work in spiritual counseling and care for those experiencing grief and trauma. Patricia has worked as a retreat director and has provided distinguished service through her ministry with Catholic Cemeteries & Crematoria, NSW;
• Mrs Marea Donovan was awarded Dame of the Order of St Gregory the Great for her support across different Catholic organisations, including the Catholic Education Commission and Catalyst for Renewal.

Upon receipt of their award, each recipient gave a brief address.

Archbishop Fisher then addressed the gathering. He remarked that it was humbling to speak after the inspiring addresses of the three women on whom the awards had been bestowed. The archbishop used the analogy of the athlete Roger Bannister who had been the first runner to run the mile in under four minutes, an achievement previously thought to be impossible. Bannister proved that it could be done and showed a path to others. The story demonstrates the power of models, people who go before us and carve out a path. For Catholics, we have many models in the saints, with Our Lord as the supreme model. He congratulated the award recipients who have done as they ought, showing others the pattern of Christ’s service. The archbishop expressed his admiration for the variety of models provided by just three people, the award recipients. He joined with the Holy Father to thank them for their service to the church.

On behalf of Catalyst for Renewal, we express our deep thanks to Marea for her many leadership roles within our organisation and we warmly congratulate her on this richly deserved award.

Bob Birchall on behalf of Catalyst for Renewal – December 2021. 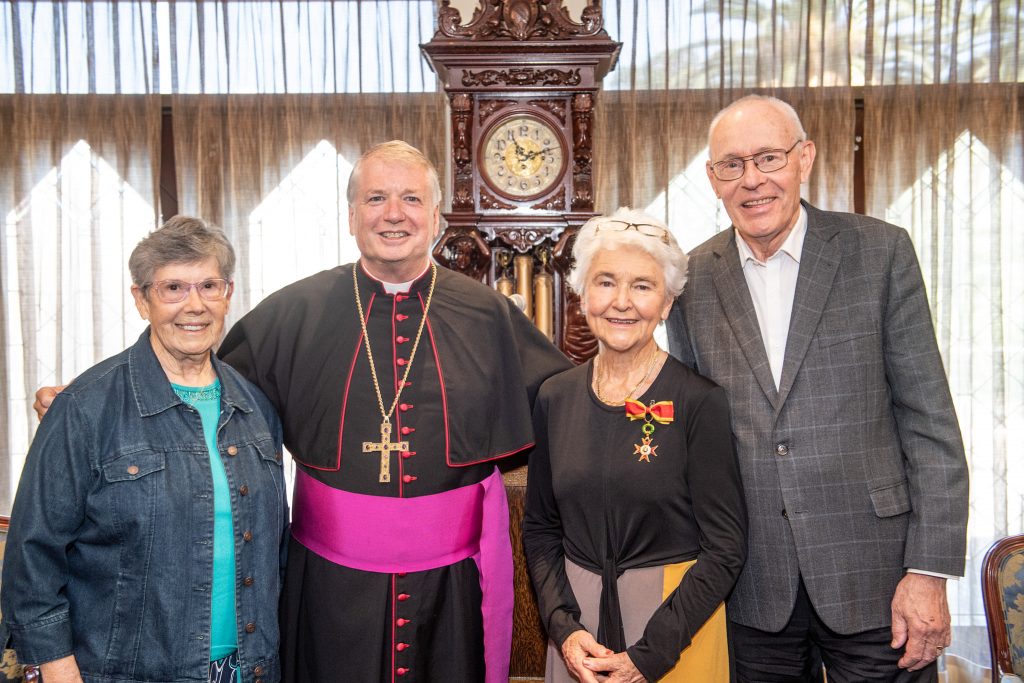 Marea’s expression of thanks on the bestowal of her award:

I have been invited to spend about two minutes in this my response. I’ve timed myself and my remarks will take a bit more than that– my apologies, Sebastian.

So here I go: Thank you Pope Francis through the good offices of our Archbishop of Sydney, His Grace, Anthony Fisher, for bestowing this Award on me. And thanks to Chancellor Chris Meney for officiating today. I am very grateful for the Award although overwhelmed.

Thinking about it all, I decided that what I am really doing today is accepting this Award not only on my own behalf but on behalf of all lay people; I am accepting it as a woman; as a wife and as a mother and grandmother; and indeed as a daughter of parents who, in a plethora of ways were living, breathing examples of Christian leadership. They showed me – by osmosis really – in their day to day living and in the imaginative ways they ran the schools in their care over the years – the importance of community; of social justice and of deep listening – all I believe integral parts of Jesus’ teachings and on which the Catholic Church is based.

I am a retired solicitor holding the degrees of Bachelor of Arts and Bachelor of Laws from Sydney University – so I would like to extend a special welcome and thanks today to my friends from those days – Judy and John Stowe and to John McLaughlin who were fellow law students and who subsequently pursued illustrious legal careers. To Sr Mary Shanahan – also one of the important influences in my life – from our days together now so long ago – when we were both “Freshers” and undergraduate students resident at Sancta Sophia College on the campus of Sydney University – a friendship which has extended from then to the present day in my current endeavours. Thank you, Mary.

I have a Master of Arts Degree in Theology and a Diploma in Ministry – the latter two from the Sydney College of Divinity. Thank you Fr Michael Whelan for your guidance and help.

David my husband and I had five children and from very early on, as well as practising as a lawyer in my husband’s and my legal practice I had a busy life in the field of education and in our local Port Macquarie Church school. For St Joseph’s Primary school, under the guidance of my parents, with the support of the amazing Fr Leo Donnelly and a series of Principals, I devised programs which enhanced the role of parents – to a level beyond that of working on the tuckshop and fund-raising! Three of our five children – Susan, Edward and Patrick – are here today, products of that time. And Audrey, one of our eight beautiful grandchildren is here too – all four having travelled from either Port Macquarie or Brisbane. Thank you, team.

Membership of the Commission itself followed shortly afterwards and then I was elected as Deputy Chair – the first woman to hold that position (and a lay woman to boot).

I was always very involved in St Agnes’ Church in Port Macquarie. Now when I tell you this little story I ask that you don’t judge me too harshly! It was the late 1960s, I was in my twenties; the Second Vatican Council about which I knew very little was not long over. Fr Donnelly chatted to me one day after Mass and said, “Marea, I’ m thinking of starting up a Liturgy Committee. Would you consider becoming a member?” I replied, “Oh yes, Father”. At this stage as David and I had a couple of young children we attended different Masses. I rushed home, reported my conversation with Father D and said to David, “David, what is Liturgy”? I have sort of progressed from that stage you will all be relieved to know!

After the move to Sydney, I was invited by Fr Michael Whelan to become a member of the newly formed Governing Body of the Catholic Theological Union, run by the Marist Fathers and which was a campus of the Sydney College of Divinity. I was elected as that Governing body’s inaugural President.

I also was a member of the Tennison Woods Education Committee Board, an undertaking of Sisters of St Joseph in the Newcastle/Maitland Diocese. Thank you for your guidance Sr Jeannine.

I have, since 1995 been an active member ofCatalyst for Renewal; I Chair probably its best known forum – the Australia-wide Spirituality in the Pub network, and head up the Paddington Spirituality in the Pub/Spirituality on the Sofa (S.O.S) Planning Team. So I thank Bob Birchall, Fr Michael Whelan, Peter Leunig, Sr Marie Biddle, Francois Kunc, our daughter Susan for support and encouragement in this field.

I continue to be an active member of my parish at St Francis’ Catholic Church, Paddington.

I have two final comments:

• As a member of the Catholic Faith tradition, I have never, ever found that being a woman was a bar to holding leadership positions.

• And last but not least – I want to thank my husband David for putting up with my sometimes quite frequent absences from home especially when we lived in Port Macquarie – flying to Lismore or Sydney several times each month – and he continues to support me as I strive to be the best person I can in my involvement in a hands-on way in our church – about which I feel passionate.