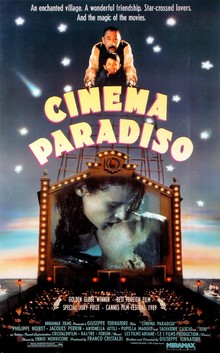 Cinema Paradiso is told largely in the flashback of a successful film director Salvatore to his childhood years.  It also tells the story of the return to his native Sicilian village for the funeral of his old friend Alfredo, the projectionist at the local “Cinema Paradiso”. Ultimately, Alfredo serves as a wise father figure to his young friend who only wishes to see him succeed, even if it means breaking his heart in the process.

Intertwining sentimentality with comedy, and nostalgia with pragmatism the film explores issues of youth, coming of age, and reflections (in adulthood) about the past – touching into our own reminiscences!

Come join us as Sr Marie Biddle hosts discussions on ‘Cinema Paradiso‘ after a viewing of the film in class.

for bookings please go to    https://www.trybooking.com/CBEYZ

Enter the Crypt via a gate east of the Church entrance (a few metres down the hill in Grosvenor St).