“The Kindness Revolution: How we can rebuild trust and restore hope”

based upon themes from his book of the same name published last year. 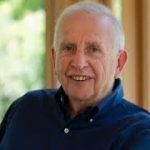 Hugh Mackay is a social psychologist and researcher, and the bestselling author of 22 books including 8 novels. His latest book is The Kindness Revolution, published in 2021.  He has had a 60-year career in social research and was also a weekly newspaper columnist for over 25 years. He is currently an honorary professor in the Research School of Psychology at ANU and a patron of the Asylum Seekers Centre. Among other honorary appointments, he has been deputy chairman of the Australia Council for the Arts, the inaugural chairman of the ACT government’s Community Inclusion Board and an honorary professor at Macquarie, Wollongong and Charles Sturt Universities. Hugh is a Fellow of the Australian Psychological Society and the Royal Society of NSW. In recognition of his pioneering work in social research, he has been awarded honorary doctorates by Charles Sturt, Macquarie, NSW, Western Sydney and Wollongong Universities. He was appointed an Officer of the Order of Australia in 2015.

Hugh’s book will be available for purchase on the day.

No need to book; suggested donation: $10

Enter the Crypt via a gate east of the Church entrance (a few metres down the hill in Grosvenor St).